September 24, 2005 recipient of the Lifetime Achievement Award from the Recording Academy (Grammy Foundation) for “Outstanding Contributions” to the music community.

The Kingsmen performed for the opening of Seahawk Stadium. 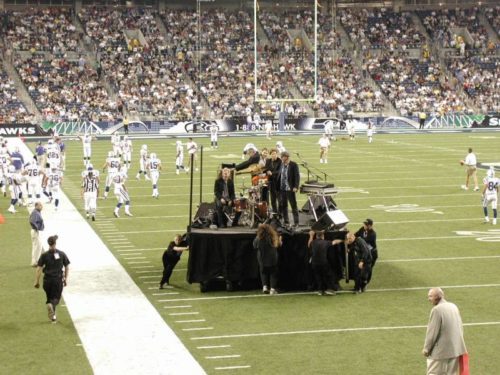 2007 The Kingsmen recording of “Louie Louie” is named by Rolling Stone Magazine  “The #4 most influential recording of all time.”

“Louie” has been in countless motion pictures including, Animal House, Mr. Holland’s Opus Quadrophenia, Coupe de Ville, Spaced Invaders, Naked Gun, Past Away, Dave, Jennifer 8, and Down Periscope, Night and Day, The Simpsons.

Named by Rolling Stone Magazine as one of the 50 most important recordings in the 20th  Century.

The Kingsmen performed on Hullabaloo once, American Bandstand 3 times, Shindig 5 times and appeared in the beach party movie with Annette and Frankie, How To Stuff A Wild Bikini.

The Kingsmen were inducted into the Oregon Hall Of Fame.

The Kingsmen were the subject of a VH-1 Special in 2000 which discussed the infamous “Louie Louie” FBI case. 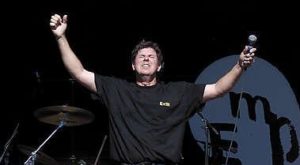 Dick Peterson leading a sing-along of Louie Louie at the EMP opening.

Not only did they OPEN the Experience Music Project in Seattle, Washington in 2000, but they also have a permanent display there, as part of the Northwest Passage exhibit.

They performed at the 40th Anniversary of the Space Needle in Seattle, Washington in April 2002.

They appeared in a PBS special entitled “Red, White Rock”.  This special, which began airing in December 2002 is a celebration of Americana and Rock and Roll’s contribution to all that makes this country wonderful!

“Louie Louie” was voted one of the best dance songs of all times.

“Louie Louie” was also one of the Top Songs of the Century according to the National Academy of Recording Arts and Sciences, Inc.

Entertainment Weekly ranked the boy’s recording of “Louie Louie” ahead of The Monkees, the opening of Hair and the Beatles rooftop farewell as one of the most defining moments in rock history (Number 30 out of 100).

“Louie Louie” is the Number 2 most recorded song in history. (Yesterday by The Beatles is #1)

In a precedent-setting case, The Kingsmen are the first recording act to sue for ownership of their recordings for lack of royalty payments and win. A case that went all the way to the U.S. Supreme Court.

The Kingsmen were voted the “Number One Touring Act in 1965” by the Association of Promoters and Ballroom Operators.

The Kingsmen recording of “Louie Louie” is played during the seventh inning stretch at every Seattle Mariners home game.

The Kingsmen performed in a “Louie Louie” parade in Philadelphia to benefit The Leukemia Society of America to over 100,000 people.

The Kingsmen are still performing throughout the United States.

×
Update Required To play the media you will need to either update your browser to a recent version or update your Flash plugin.
The KINGSMEN @2018